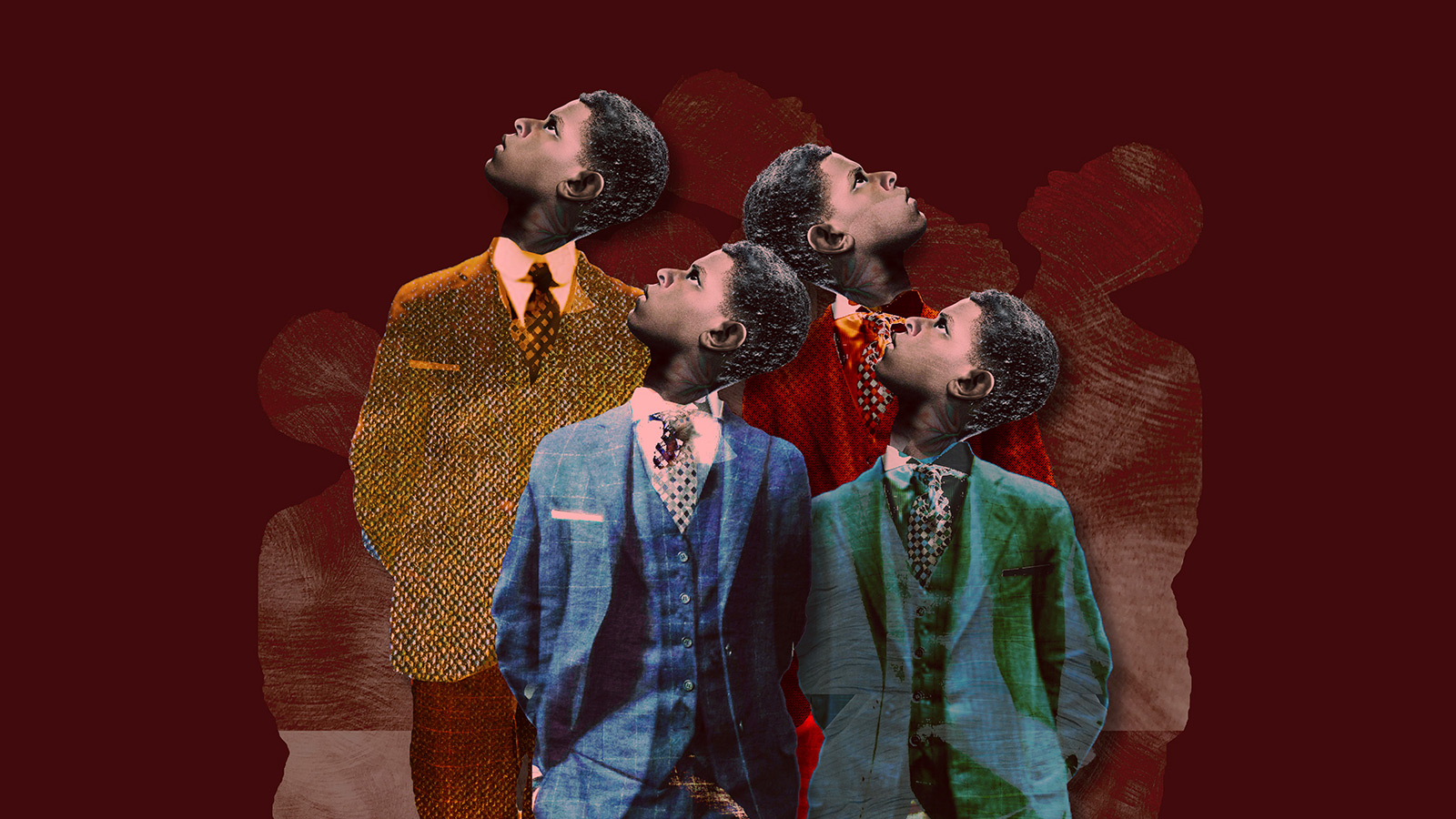 Dave McClinton‘s striking digital collages are full of layers, both in materials and meaning. We talked with him to learn more about his process and get advice for fellow artists wanting to push the boundaries. 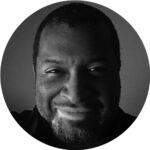 When did you first get into art making?

One of my favorite photos is of me wearing one of my Dad’s air force shirts, but backwards so it’s like I’m wearing a smock. And I’m painting, and I’m probably 4 or 5 years old. All kids paint, but I was just lucky enough to stay with it.

I’m a graphic designer and when I was in college I had to make a decision – studio art or design – and I chose the “practical route” of graphic design. So really I’ve been making art all along, I just started showing it in 2015. I was never confident or serious enough to show it to someone and elicit a response.

What sparked that confidence boost?

Well I wouldn’t call it a confident boost. It was more of a critical mass inside me. Particularly after Trayvon Martin, then Mike Brown and the original earlier Black Lives Matter things. There was just this list of names that everyone was talking about. And it occurred to me that I already had a list. I already had a list of names going back to 1955. There were so many names that it hit me like a ton of bricks like – what am I waiting for?

It wasn’t a sudden boost of confidence, it was feeling very shameful that I hadn’t done it earlier.  It was like “You have a voice, use it, get the story out. Get your perspective out there on what it’s like to be black in America. It’s a unique experience and everyone’s is unique.

are Conversations easier to have when you’re showing art?

The conversations got started because of the art.  The art was the first salvo in that conversation.

Last Fall I participated in the Other Art Fair in Dallas. Some of my work is controversial or shocking and there was one piece I had out there that was the profile of a black man in a suit but he had a noose around his neck, it’s like a business man’s tie. And I was talking about and defending that piece for 4 days.

Here I am in Dallas, TX, speaking to a 50-something year old white woman about race. And that never would have happened if it wasn’t for the art. We come from to different worlds and we’re talking about racial relations in this country. So, yeah the art is the conversation. And sometimes the conversation doesn’t happen without the art.

You have these two art forms, what you call culturally based imagery and CRUMBLED PAPER LANDSCAPES. Can you describe them?

Yes, they are both digital collages. When I was in school I was sculpting and painting and I thought when I come back to art I’ll be doing that. But when I started making art again, I didn’t have access to a studio space. So it just made sense to make art with a computer. It was the tool in front of me.

What is your process?

So for the digital collage of portraits or bodies, I start by going through family photos and I would take shape of the face and take the eyes, nose, ears, and mouth from different photos. When I ran out, I started taking photos of myself if I needed a certain shot. Now I have enough of a library of images that I’ve built up.

I constantly take photos of textures. The building I live in, there’s this polished steel on inside of elevators, and I just like that swirl, so I use that a lot. It’s a constant layering of images and photos that I’ve edited.

Another aspect of it is going through the Library of Congress and finding slave ads and slave posters. Showing them in pristine fashion can be powerful enough but I wanted to incorporate them to make the narrative cut even deeper. I’ll take snippets out of speeches written by pro-slave governors, or the book The Sound and the Fury.

Each piece probably has 25-30 images in it to make up what I’m doing.

Do you see these two forms as overlapping or as separate from one another?

They were meant to be separate because I needed a reprieve. The cultural stuff can be heavy sometimes. The crumbled paper stuff, that’s what I call it, it was an accident.

One day after Christmas I had all this discarded wrapping paper on my kitchen island and it hit me that it look like a mountain and I took a photo of it. And then I started doing it on purpose.

I started experimenting with other paper, like the tissue wrapping paper, butcher paper, craft paper and just started crumpling them up and taking photos. It was this wonderful reprieve. It was fun. I’m just making pretty things.

But, America. America just won’t let go. So those themes filtered into what was an idyllic peaceful, pure thing, because hey, you know, we’re addicted. America is addicted.

We chose our theme Surreal // So Real before march of this year. And now, Part of me thinks that these times seem surreal but they also don’t. They make a lot of sense. Do you describe the time now as surreal?

I’ve been having to gently chastise my melanin challenged friends that this is nothing new.

Some of my friends are posting things, and some of them are frustrated and they are shocked that I’m not more frustrated. But if you look at the tread on my tires, and the tread on their tires, to use that metaphor, their shit is fresh out the showroom.

It still hurts. But I don’t have the demonstrative reaction to it. So it is surreal and it is super real. And I think that’s a funny play on words that I’m going to use in my art.

How much do you tell the viewer about your art?

There’s this constant struggle of do I explain every last thing? If I do that, does it take away from the experience?

I’ve heard you say that your art is not finished until the viewer sees it. Can you elaborate on that?

The art isn’t finished until someone reacts to it. If I have the art and I don’t show it to anybody, it’s nothing. It’s nothing until someone sees it and reacts, whether it’s positive or negative.

How are you continuing to communicate or have conversations with canceled art shows and less personal contact?

I was supposed to have a show in May that got canceled. My immediate reaction was to find an application or website for a virtual exhibit. And I found several, but none of them worked perfectly. Some opportunities have come up for gallery openings in the next 6 months, so it’s kind of mitigated the need to show work so now I’m creating new art.

I was fired up to get out there and engage, then COVID-19 took it away, but other opportunities came up. Instagram has been a big place for me. I’ve been trying to figure out other ways to engage. Instagram is fine, but you can’t see things up close. My art is very detailed, and some of those details can be a sledgehammer. It’s been a struggle to figure out how to engage. My 7-foot wide pieces don’t translate to a screen.

“If you put out work that is reactionary, don’t be shocked when it’s reacted to. “

Do you still have conversations about your work?

It’s really hard to get people to engage deeper. Maybe it’s hard for them. Maybe they feel like they’d be intruding somehow.

I’ve been considering being quite literal, and just asking questions. Uncomfortable conversations can be great. Someone’s going to learn something.

Do you have Advice for younger artists looking to share a political or social message?

Aside from do it, the advice would be: you get what you ask for.

If you put out work that is reactionary, don’t be shocked when it’s reacted to. Be ready. Be ready to defend it but don’t be defensive. It means providing the research you’ve done, emotional place you’re coming from, and intellectual exercise involved in creating the work, that’s what defending the work means to me. It’s a verbal or written platform that explains what it is, and why you’re doing it. Understand that not everyone is going to dig it, and that’s a good thing.

Reactions are everything. Know that every reaction, that’s why you’re doing it. So don’t shy away from work that is about hard to discuss topics. You’re providing a much needed function for society as an artist, because you’re there getting people to talk about things. So whatever happens, happens. That’s what you’re there for.

SUPPORT Dave & CHECK OUT MORE of his work! 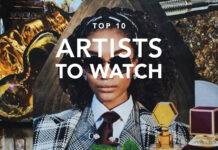 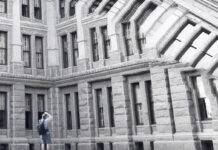 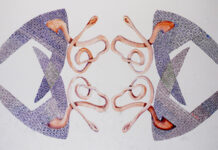 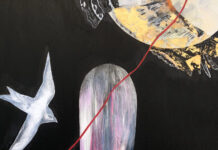 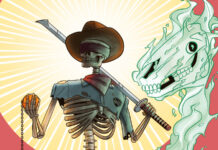