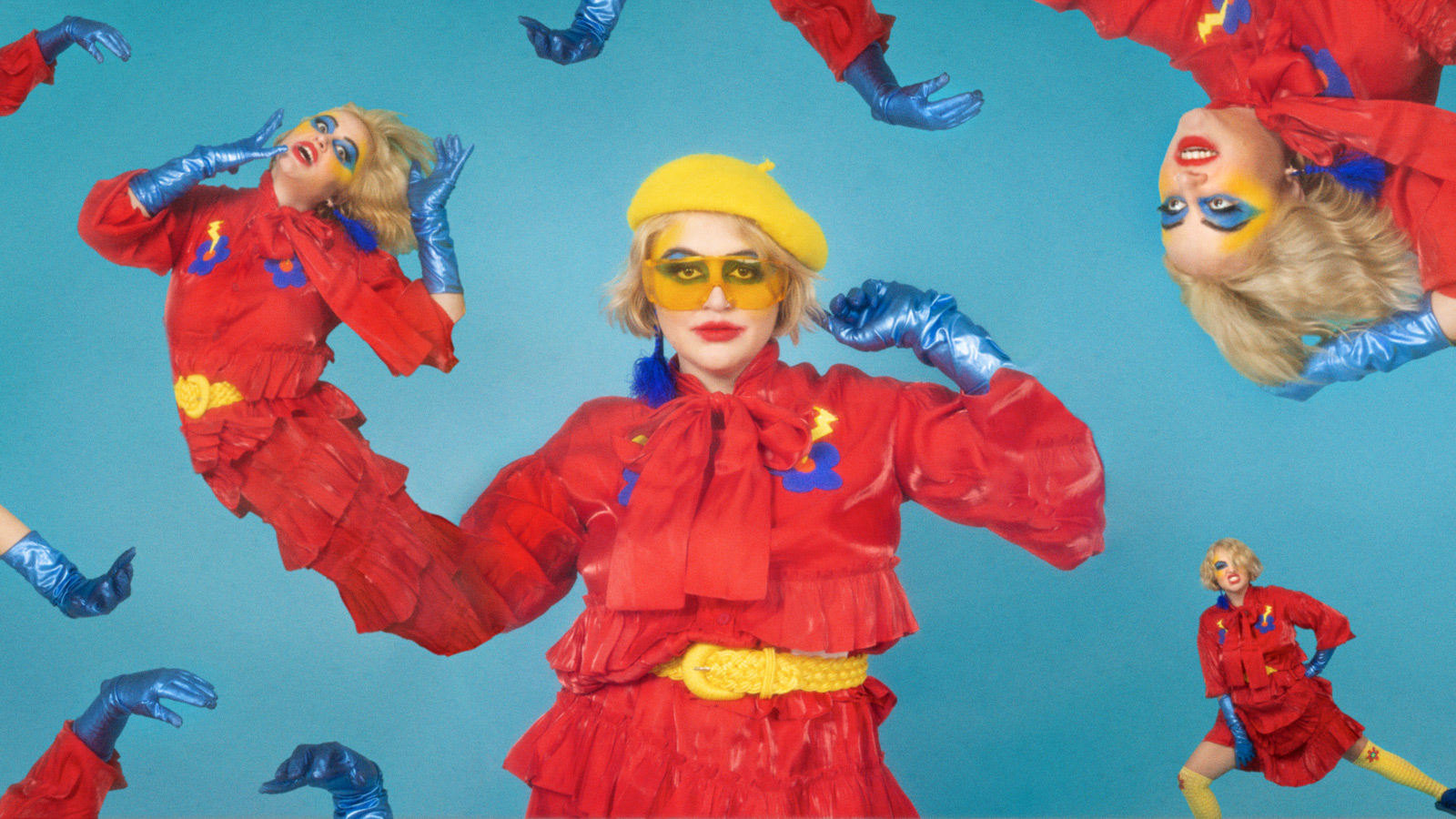 Local psychedelic pop band Calliope Musicals is on the path to a big year.

The pandemic forced the band to slow down, write and create, laying the groundwork for shows in 2021. Admittedly, this was something they didn’t always have, especially with the endless cycle of live music opportunities in Austin and lead singer Carrie Fussell’s aversion to the word, “no.”

Clearly the hard work has paid off. The band recently released “Can You Tell Me,” off of their forthcoming EP, Between Us, accompanied by a colorful, surreal music video.

For the music spotlight of Issue 19 “Make/Do”, we talked with Carrie about her music inspirations, how she overcomes writer’s block and dealing with the unexpected while performing. Lucky for all of us, she had a lot to share. 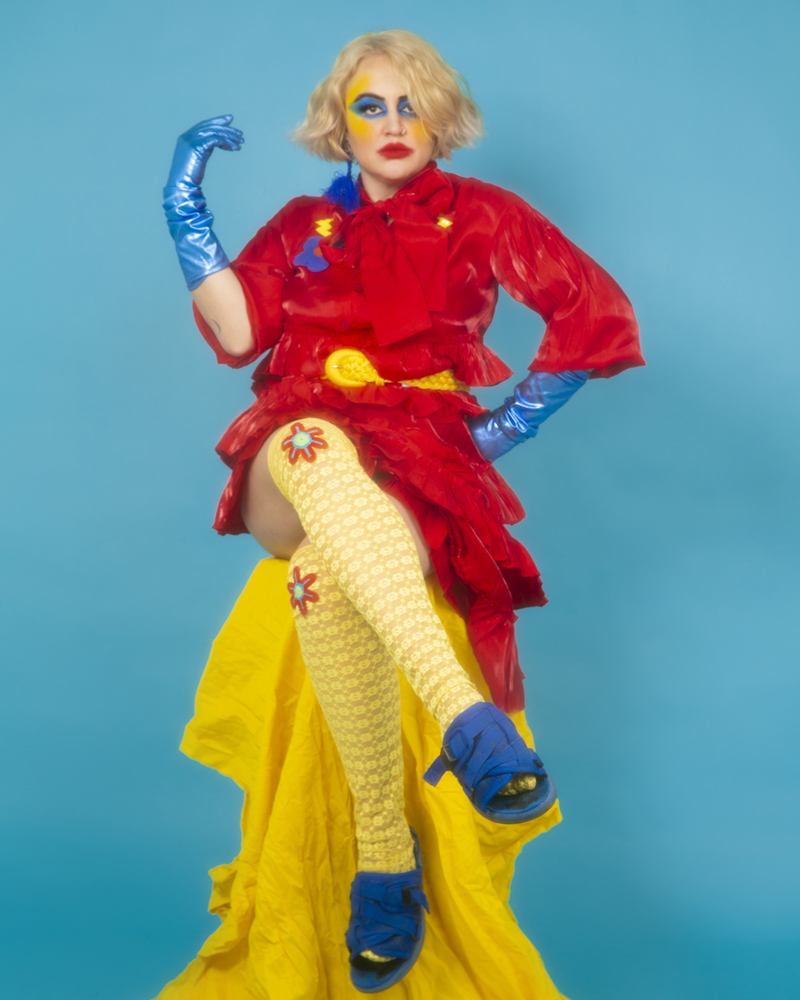 What are some of your inspirations when making music?

I’m a fan of music first, since I was a little kid. I’m constantly listening and finding inspiration in the artists I look up to. “Can You Tell Me” was very influenced by choppy David Byrne style vocals, but I knew I wanted this Madonna “Ray of Light” energy half way through and in the production elements. We like to channel similar energies into each song.

All of the songs on our Between Us EP are misfit songs. Two songs were cut from our last full-length, the two that were the least congruent with the rest of them.

We parted ways with a member and whenever that happens I go through an intense moment of self-doubt. I start thinking,

“We have to go into the studio; we have to make sure that we don’t suck.”

“Can You Tell Me” and “This Means War” were both recorded in one of those time periods. I’ve been playing more guitar and it’s hard to develop guitar and vocal parts in real life so the studio helps developing things beyond their first iteration.

“This Means War”, was inspired by a songwriters’ tour group that I was a part of. We got to go to Halifax Pop Explosion and Folk Alliance in Montreal, and this crazy outdoor art fest in Vietnam that didn’t end up happening. So we ended up just having exploratory time in Vietnam, at the same time that news came out that Trump was gassing refugees at the border.

We were at the Hanoi Hilton and the building was just filled with oppressive history and dark energy. It’s always weird to learn stories about the US on foreign soil and makes you understand that we are not fully the good guys all the time. Honestly, I get really angry, and even though the tone of our music is always happy and uplifting, you can occasionally hear cynical, afraid or angry vibes underneath the lyrics.

When you find yourself stuck, what motivates you to get back on track?

At the beginning of the pandemic I was like holy shit I don’t have to do any of the music biz stuff, I can just do the stuff that I like! So I was creatively energized.

After making this new EP I’ve kind of been in writer’s block mode and I feel a little shriveled up—like a squeezed out orange. I’m writing all these sadboi Phoebe Bridgers songs right now and I keep thinking “who’s writing these songs?”

They’re not lyrics that I artistically identify with but they’re really raw. I don’t really sit down and think “I’m going to write this certain type of song.” Whatever comes out is what you’re going to get.

So then I think “how can I remove elements of the song until I’m left with the things I really love about it?” I shift into production mode to change the song to fit my style.

Doing work on myself as a human also helps stir up settled waters. Right now I’m writing a letter to someone I’m really close to. I needed to share some hard truths with them in order to exist peacefully in myself. And now I have all these new feelings to process. And I also get to forward myself!

I also go through my older journals and I’m like “I literally don’t know who wrote this. I feel like I found someone else’s journal.” But that’s a tool to pull from creatively. I’ll see a sentence I wrote and it will strike me in a totally different way and that turns into a creative catalyst.

This happens a lot too—I’ll go to a great show and I’ll just be in the crowd like “god I just want to go home and play music.” So I’ll start heading home with all these new ideas. “Can You Tell Me” was 100% a drunk phone voice memo for a long time.

Do you have a story of where you had to “make do”?

In my experience, tour is the king of these situations. You’re on your toes constantly, walking into venues expecting one thing and getting something completely different. I’ll do solo performances sometimes because I’m trying to play more guitar but I get pretty severe stage fright up until the moment I step on stage.

I’m taking guitar lessons from Elliot. He’s aware of my goals and vibe and the things I do well and things I need to do better on.

With my solo shows I often use my looping pedal and I’d say those shows I mess up a lot which is helpful. Messing up is something that just makes you a better artist. There’s no amount of behind-the-scenes practice that can prepare you as much as fucking up on stage, whether it’s in front of 10 people or a big crowd. I even get nervous in front of Elliot! You just have to play through those feelings.

I sing allllll the time, way beyond my 10,000 hours. In the car. In the shower. Anywhere. So I’m so used to knowing how to fix things and move past them but with guitar my fingers are so nervous and unsure and afraid of where they’re going.

There was this one time during SXSW 2017 at Doc’s Motorworks where things were chaotic leading up to our show because Docs had posted on their marquee—something like “Ladies, unless you have your beach body, don’t wear your spandex.” I was so pissed like “Fuck you guys. Don’t worry, I’ll be there in my gold spandex sequin hot pants and see through top, absolutely not beach-body-ready.” Like fuck these guys.

So anyway we find our stage and it seems legit and we set up and start playing. It’s fun and sweaty and the stage was bouncing the whole time. We’re a bouncy band so everything’s like shake shake shake. So half way through the set our keyboard player’s amp goes out and one by one all of our amps die and it sounds horrible bc you’re only hearing half the band at any given point. What do we do? We went and got an acoustic guitar from the car and turned it from a loud dance party into an acoustic sing-songy set. You know SXSW crowds are crazy loud but everyone ended up getting so quiet and gathering in and we had this magical moment.

Everything that could have gone wrong did, but we made lemonade! Our booking agent had left a bunch of empty dates on our tour but we ended up booking a show in Buffalo, NY and two other spots because a guy had seen that performance and LOVED it.

We were playing Hotel Vegas once and sometimes we’ll try out untested performance things. People might be into it or might have no idea what’s going on. But I had this idea of ending our show with this one song where we’d do a live radio fade. And as the volume is fading down, the band will melt into the ground and then it’ll be over.

So we did it and we get on the ground and everyone’s clapping but they don’t understand that we’re done playing and so they keep clapping and won’t leave. We’re laying there for a long time and I got really anxious, and didn’t know what to do. We can’t just lay here for 10 minutes… 20 minutes?

We have this song called “Peaches” where we get everyone to sit on the ground and yell and sing. And even though we hadn’t played it in a year, I’m like “WE HAVE TO DO SOMETHING” and we ended up playing it and it went great. Pulled it off. 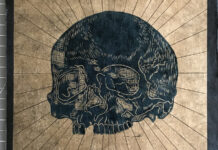 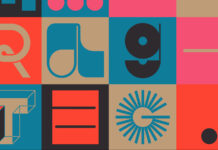 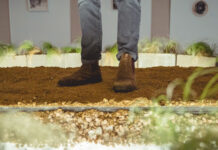 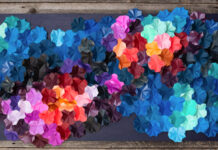 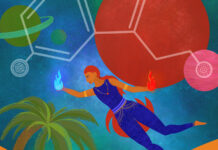 There is Magic in Rhea Pirani’s Digital Art